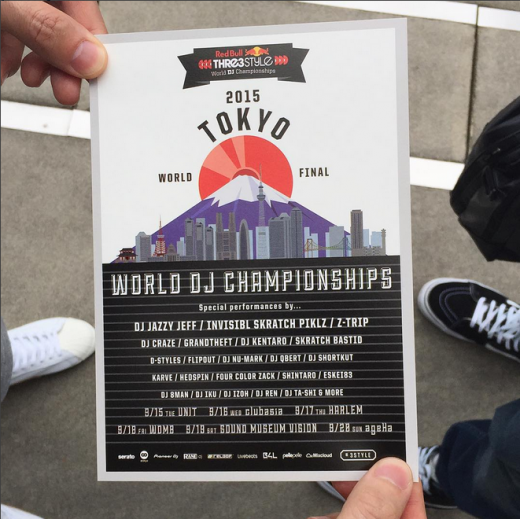 Check here for updates from the Red Bull Thre3Style World Finals week in Tokyo, Japan. We'll be updating the results as they happen, sharing stories, photos & video from the week of competition leading up to the grand final.

- Welcome to the Red Bull Thre3Style World Finals Week! We're currently awaiting the all-important draw where we will see who will battle each night in the heats.

- The draw has been made! Good luck to DJ Byte, Cinara and J Espinosa who are getting us started in the first round of heats. For a full recap of day one, read this blog update.

- During some of the downtime, we'll be heading to a few of our favourite places in Tokyo during the week to show you some great food, coffee, fashion, sneakers etc. Here's Rui from Serato HQ at Magic Stick.

- It's all happening tonight, the first round of heats. Lets see who takes the first finals berth in this battle of the Americas! Stay tuned for more updates...

- We've just released a film with previous world champions, Hedspin and Four Color Zack. They talked to us about winning the championship, what it means afterwards and showed us a few of their routines. Watch here!

- While we're waiting to kick this all off, Rui from Serato HQ showed us his favourite place for coffee in Tokyo.

- What a night. All three competitors really showed why they are in Tokyo this week for the finals. Congratulations to DJ Byte for taking out round one and advancing to the grand final. For a full recap of round one from Matty P, our man on the ground, read his play-by-play.

- Another huge night of competition with DJ Charly Hustle picking up the second berth in the grand final. Eskei83, Z-Trip & QBert all played amazing sets in support too - read a full report on round two here.

- We've over halfway now in the heats for the Red Bull Thre3Style world final. Congratulations to DJ Wizz for getting a spot in the grand final. Representing Switzerland! Read an update on round 3 from the team in Tokyo.

- 2013 champion Shintaro talked to us about how he won the championship and showed us a few things... Watch the film.

- There's now only one more round of heats left before the Red Bull Thre3Style grand final. Congratulations to Dan Gerous for securing Germanys spot in the final! Catch up on what happened in round 4 and listen to the mixes.

- We are trying to catch up with all of the winners of the Heats so far to talk about what competing at this years competition has been like, what to expect from the finals and general banter. The first are from DJ Byte, winner of Heat 1 and Charly Hustle, winner of Heat 2. Keep an eye out to hear from the other winners.

- The heats are all done! Check out what happened in round five.

- We caught up with last year's winner Eskei83 to present his prize for winning in 2014 which consisted of two framed Serato control vinyl stampers in front of the whole crew. (We couldn't get them over to Azerbaijan unfortunately).

- Congratulations to DJ Byte from Chile, who is the new Red Bull Thre3Style World Champion for 2015!!!!!! Read what happened and listen to the sets from all the finalists here.

- That wraps up our coverage of the Thre3Style World Finals from Tokyo, Japan this year. Thanks for reading and see you next year :)