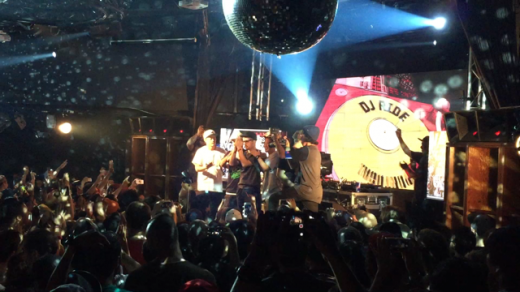 For the final night of the Thre3style world final heats we were off to Vision night club.
Chile legend and 2012 3Style world finalist DJ Drummer opened up the night. Drummer is probably the nicest guy here. He's also incredibly nice on the turntables.
Local legend DJ Ta-shi from Japan stepped up to show us how it goes down with another spectacular local performance. Ta shi has been holding it down in Tokyo since way back in the day and has the deep selections and skills to show for it. I must figure out how he got all those exclusive edits!

Mr Skin from Taiwan began the competition and using the Pioneer DDJ-SP1 had a cool start with some live drumming into the classic jams, "Shook Ones Pt II", and "People Everyday". Dynamically jumping between heavy metal, classical and what I assume was local (Enka) folk music and remixing it for the club without ruining the integrity. He followed that up with a cleverly made dub of "A Milli" replacing the "Milli" with “Konichiwa", Mr Skin really brought it for Tokyo crowd respecting the local culture and still maintaining the vibe and energy. Even the slightest tech issue didn't shake this confident and charismatic competitor.

Bomber Selecta from Thailand brought a lot of original flavour with his reggae style and current tunes, a well balanced set of less played out tunes kept us engaged. Flipping tones of "Rich Girl" to Truffle Butter", and Yazoo "Situation" to Madonna "Like A Virgin" was just touched on to keep it tasteful. However clever it was, it did feel a bit formulaic.

Lucky bastid winner DJ Ride from Portugal was ready to go! Killing it with a drum routine of Keys N Krates "Are We Faded" and dropping other gems by artists like Flume gave his set a unique, modern and well curated theme. I’d say this alone contributed to a winning set, but Ride also had the skills to take it to the next level. I’d say this was the most technical sets i’ve heard all week. Extremely well rehearsed, there were zero mistakes.
Aleqs Notal aka DJ Karve, who was the first Thre3style champion from Paris in 2011 came with a bag of recently purchased vinyl. A tasteful combo of boogie, house and other soulful jams made for a nice contrast from the high energy DJ sets of the competition.
The judges had made their desicion to send the lucky Bastid from Portugal to the finals!
The Magnificent jazzy Jeff took to the stage and proceeded to do what only Jeff can do. Play the best songs in the best way possible, with the best attitude in the game! Truly a master at work.

Next up, the grand final!