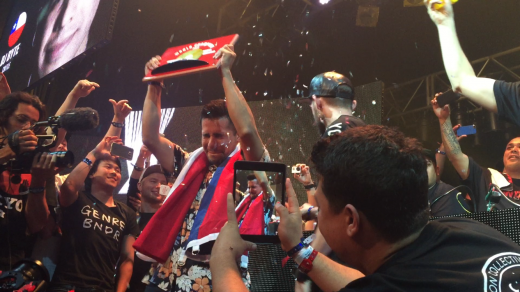 The world finals night for 2015 was set at Ageha, a spectacular venue appropriate for a week that has been nothing short of that. Each day has yielded a wealth of magical and memorable moments, making the whole competition a landmark moment for the DJ community - not just in Japan but worldwide.

Live streaming to fans around the globe this really made the event feel that much more connected to the world. Everyone is watching as the competitors from each of the qualifying countries bring their best.

The past champs did a great favour by opening the night. Playing to their strengths and consciously playing exactly the right tunes to set the mood and still highlight their personality, Karve, Hedspin, Four Color Zack Japan's own Shintaro and reigning champ Eskei83 took us on a journey through their fave jams whilst allowing plenty of breathing room for the competitors to drop the big tunes later on. Here's hoping the finalists had the goods to follow this impressive line up. Whoever does, will be past the baton to be included in the esteemed league of the Thre3style championships.

Before the completion started we were treated to a slamming set by DJ Numark, breaking out the jams and the toys! We got to witness the full live experience that he is so famous for. I wonder if Numark had picked up a few new gadget in tech heaven of Japan...

The first DJ up was the wildcard J.Espinosa (USA). After preparing a new set, he'd learned from his first round experience to avoid any more obvious tunes and brought refreshing material, exclusive dubs by Mystikal as well as interesting world play which is what I'd consider his signature style.

The large club environment of Ageha seemed suited to J Espinosa's big tunes and he satisfied the crowd with modern bangers like DJ Snake's remix of "I Know You Like It" (Snake also happened to be in Japan). Paying respect to his judges, throwing back to some bonafide hip hop and house classics showed his intimate knowledge of jams new and old. Playing Detroit's Filthiest "Pass Out" to A$AP Ferg's "Work" was a highlight for me, and clearly the crowd too.

Ending his set with an exclusive Super Beagle "Dust A Sound Bwoy" dub was tight!

Chile's returning finalist DJ Byte was up next getting hands up in the air immediately. Ultra clean transitions added to a strong start. Moving into some slow jams added diversity to his set and allowed him to move in to a live drum routine over "Cha Cha" which was a unique addition to the competition. A blazing horn tone play medley set through everything from TROY to Tequila using the Jimmy Castor bunch turned the party out! Byte was a clear favorite with a judges after that extremely strong set.

DJ Ride from Portugal had a final round set ready to go. A hard Job to follow up after the previous set, ride ran through his tunes quickly remaking show me love and flipping it in to a trap version fired the crowd up. Unfortunately the transitions seemed a bit abrupt, that I think would take points away.

Bringing the old school vibes we have Canada's rep Charly Hustle. Rocking the doubles and with the dance moves to match, Charly was engaging as ever. It's showtime! He borrowed a lot from his winning set, which was smart but wouldn't win any extra points from judges. Charly had the crowd waving their hands and busting out his great vocal medleys was great. The theatrics of ending his set with Queen was a strong effort that was met with great applause.

Germany's own Dan Gerous had "chicks in Tokyo getting it on" and was rocking the Tokyo Giants jersey Dan Gerous ran a dope exclusive dub of Major Lazer's "Lean On" and kept it melodic, keeping things flowing nicely in key. He busted out the flames and rocked the vice themed medley that won him place in the finals, but this was the finals and he needed something more! A couple of amazing dubs of some huge tunes was a fantastic ending and Dan Gerous' charisma was on point but was it enough?

Switzerland heavy hitter DJ Wiz came out the gate with the DJ Premier drop we all wished we could have, but don't... Adding in some new flavour to his winning set was enough to keep it refreshing, but when compared to the other sets that the other few competitors had prepared it would be hard for Wiz to take it all the way. Still, the crowd loved it and he provided a well thought out set, bringing his set to a peak with the Herbie Hancock "Rockit" tribute which was absolutely incredible. All the judges were getting out there seats! I was super impressed with his cuts too.

The level of talent on display was really something else. The only thing to really top it would have to be the legendary Invisible Skratch Piklz. Shortkut, D Styles and Q Bert performed their brand new material for the first time in 20 years!

The crowd anticipated the winner with patience but it felt like the winner had already been decided earlier in the night.

In 3rd was DJ Wiz

And a well deserved first place went to the Chilean champion DJ Byte! 🏆🏆

The vibes were thick and a celebration was in order after such a legendary week. Judge Jazzy Jeff and Skratch Bastid kicked it off, followed up by Craze and Kentaro who went in on a back to back routine that I luckily caught on camera! Getting treated to sets by the worlds best DJs for the rest of the night was the only way we could party from now on...

Thank you for tuning in and reading, it's been a great time. One every DJ should have the chance to enjoy!

Thank you to Kenny and the whole Red Bull team for creating such a great event, and shout out to Flipout and 8man for keeping us entertained and informed through the nights.