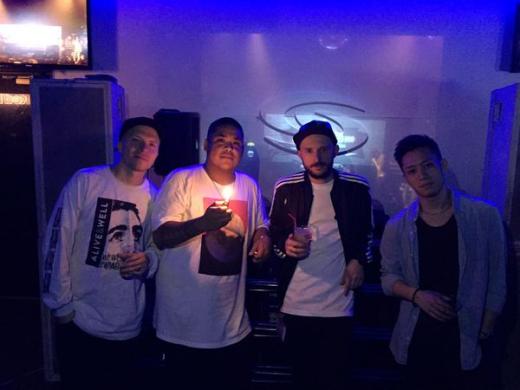 We arrived at Club Asia in Shibuya to the sounds of previous world finalist Nedu Lopes. Hailing from Brazil, Nedu always comes correct with a super clean set. Using the Serato DJ Slicer to its full potential, Nedu shows what it takes to be a Thre3Style alumni and in fact is the only person other than Kenny Mac (Thre3Style creator) to have been at every world final!

The first competitor tonight was Albania's own Kut Real. Busting out the body tricks and beat juggles is always a welcome addition to any finalist sets. Kut real really repped well for his country. From Styles P into the Keys N Krates remix of Tove Lo "Stay High" was a sure shot mix - guaranteed to win points with the judges (and me too!)

The responsibility to kill it for a solid 15 mins with consistent bangers is really no easy task. Kut Real definitely had the energy, but I'm not sure it was enough to take him to the finals. The crowd was certainly pleased with his tunes though!

Azerbaijan was the host the world finals in 2014 and the man to represent for that country this year was DJ Nez. He got right into things with some pretty bass heavy dubstep, moving into twerk versions of "Hot Boy" before moving into a couple EDM bangers to keep the energy way up. Nez's set was clean but maybe a bit too clinical. It certainly had diversity, but it didn't resonate with me personally.

It's really hard to define the X factor that makes for a memorable Thre3Style set but when you hear it, you know.

Charly Hustle certainly had crowd support from me but apparently there was a large Canadian contingent in the audience too!

Kicking off with the Jamie XX sample of "Good Times" was a strong start and Charley kept the good vibes flowing with classic soul joints tastefully mixed in between more modern cuts. Running some familiar highlights from his winning sets, notably his breakdown of Mary J Blige's "Family Affair" to create Come On Everybody Party With Me to a successful beat juggle and breakdown of the aforementioned track. This was surprisingly well received by the crowd. Charly's (dare I say... Jim Carey esque?) antics and personality shone through, winning points with the judges. Avoiding played out cliches and strong track selection (haven't heard many people play AWOL one and Cha Cha as much as you would think in the world finals) made it a good look for a place in the finals.

It would be fair to say I'm biased being Canadian myself but hey... Nothing wrong with a little patriotism right? And his mom came all the way to see her son kill it in Tokyo, damn that's charming.

A very warmed up crowd were ready for Latvia's Dj Aspirins.

DJ Aspirins started with some cool body tricks and some inventive techniques using the turntables in some unique ways. Unfortunately a few of some less than precise blends really took away from these highlights. The crowd was the true indicator that DJ Aspirins would need to provide a stronger set next year to ensure another chance at the title.

It was now time for the judges to determine who would advance while Eskei83 the reigning world Thre3Style champ from Germany stepped to the stage to let everyone know he was there to rock the party. That's precisely what he did. His intentions were clear and came to fruition with the local crowd feeding off his energy and innovative DJ style.

It's so good to see the world champion continuing to progress with even more confidence, making it obvious why he took the crown last year.

With Z-Trip tearing it up after a blazing set by ESKEI83 as well as a guaranteed mind-expanding scratch fest by DJ Qbert you could say we were very happy tonight!