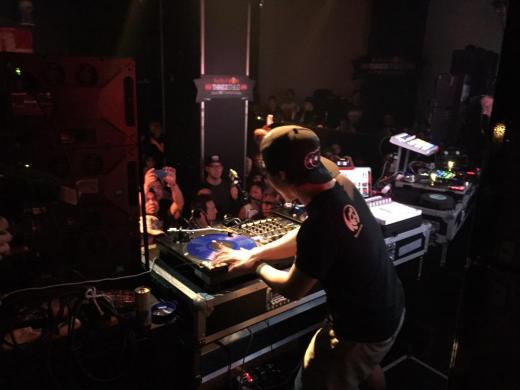 Round 3 report from Club Harlem in the heart of Shibuya!

Last years Finalist DJ Twist from Azerbaijan set the evening off with a nicely varied set to an already packed club. I was super pumped he played AZ's "Problems” - a jam that I don’t often hear in the club these days!

The first of the competitors tonight was Carlo Attendido who hails from a country that has contributed more than its fair share dope DJs... The Philippines :) Rocking body tricks and impressive doubles Carlo kept his set engaging visually and technically. A hot pick and finalist from last year, he had a lot to follow up with. Lots of funky tunes and confident cuts provided a strong set to start the night. Ending his set with a drop by Z-Trip and "arigato" to the host country was a tasteful finish.

Poland's own DJ Vazee came out to some heavy tunes and a bunch of swagger. Vazee provided cool transitions and refreshing blends. You get a good feel for the personality of a DJ by their song choice and Vazee had a bunch. Really creative melodic cuts contributed to a unique set. A lyrical faux pas may or may not have got lost in translation but was likely noted by the judges. Vazee was not trying to make any friends with the other competitors tonight.

Switzerland finalist DJ Wiz set it off with a legendary DJ Premier dub!!!! Huge props for the custom Thre3Style drop. He got right into some clean cuts and a Japanese version of Jackson 5 "I want you back" , to an incredibly innovative transition into Justin Timberlake "Rock Your Body" was a very strong start.

He continued to drop the exclusive drops, this time from Juju (of the Beatnuts) and Pharaoh Monch - DJ Wiz must have some deep pockets or some serious hookups! With so many tricks up his sleeve he donned a sequinned Glove and replayed the familiar bassline of “Billie Jean” in tribute to the King of Pop. Ending with another outfit (Biz Markie) and dub of “Nobody Beats The Biz" flipped to say “Nobody beats the WIZ" whoa! Nuff said.

The usually quiet and calm B ball was anything but that tonight, actually entering the stage with a bang. A
really impressive and balanced skill set running back to bangers and dubs with a slow motion doubles routine. His slick and precise cuts (best in the comp thus far) and tasteful tone play that had the hometown crowd enthralled and proud of their representative tonight.

While the judges made their deliberation DJ Hedspin rocked the party with new routines including a brand new production and some ill Slicer flips of DJ Shadows "Organ Donor."

The Judges took the stage to announce the winner while the crowd chanted Switzerland! Switzerland! The Swiss DJ Wiz would indeed be heading to the finals on Sunday.

Following after we got a chance to witness a live performance of Skratch Bastid's NVWRK routine he so cleanly executed on his Rane TTM57MKII video… amongst other new and exciting routines.

A very under the weather Shortkut powered through a set featuring personal favourites like Tropkillaz Badman and other Dancehall themed bangers which the Shibuya crowd were very appreciative of - while I tried an interesting beverage called Zima along with some Redbull :)

A nice Ramen meal ended our evening with some good friends. Japan is so awesome. Definitely a lovely place to have this competition. Thanks for reading.

See ya tomorrow night to do it all over again.