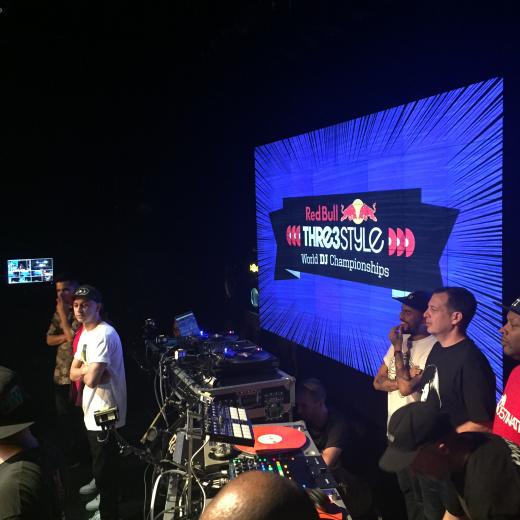 The first round of finals this week were held at Unit nightclub in Daikanyama, with the fun loving DJ 8man from Yokohama setting the tone for the night. The two time Red Bull Thre3Style Japan champion was a great opener for the battle ahead...

Red Bull Thre3Style style host DJ Flipout, typically known for his radio shows in Vancouver and signature 45 sets worldwide, got to flexing his laptop dexterity with some really creative live blends of classics & modern beats such as "Lord Flacko Jodye" with the Wu-Tang acapella of "Bring Da Ruckus". Sticking with this theme, the set was really refreshing - I'm definitely hitting Flipout up for some of these exclusive mixes! He also got a chance to show us a bunch of dope Flips! Really inspiring stuff considering I've not seen many people re-create classics by Gang Starr and Dipset live in the club.

The first DJ to step up to the plate, DJ Byte from Chile started by cleverly sampling the host Flipout saying “Japan are you ready to party?!” to set it off with a super clean intro. He proceeded to work his way through a great selection of tunes that were very refreshing while using cool audio snippets of Giorgio Moroder and lesser played tunes. A highlight was his live remake of Flumes "Hyper Paradise" remix which was really innovative and inspiring. He set the bar very high making it an intimidating prospect to go next.

Byte really displayed a  diverse knowledge of big tunes and classics with interesting transitions snatched from YouTube clips. Ending with Kanye's recent speech about "new ideas" made for a strong finish.

Next up, Brazil's Cinara. She used really strong selection to her advantage. This is really is one of the things judges were looking for this year. This proved to put her in good standing, and a couple of very clever wordplay routines later, coupled with some cool tone play and really clean cuts proved to be a solid foundation. Playing Sango tossed in with couple of songs I personally wasn't really a big fan of (Spice girls..?) kept me from really feeling convinced this would take her to the finals. However a strong ending shouting out Flipout to “Wiggle” his “big fat butt”? was pretty fun and met with good response from the judges. Clearly an inside joke. Props.

USA's J.Espinosa had a big responsibility to show n prove! Rolling deep to the finals with a good posse was a great plan. Espinosa is no stranger to rocking a crowd being the stadium DJ for both the Oakland Raiders and the San Francisco Giants, so you know he wanted to bring the title to San Francisco for the first time.

He was aiming to turn the party out with a high energy start full of cool transitions and crowd pleasing tunes. A nice live blend on "Lean On" to "Lean Back" by Terror Squad was tasteful as he kept running through club bangers new and old. Moving into some hard rock was refreshing and in the true spirit of the Thre3Style competition. It might have been over some peoples heads but repping the bay with a little Metallica was not lost on me. Rage Against The Machine made for a nice transition into some good old fashioned g funk and a little UK grime let everyone know Espinosa has a deep understanding of many genres - and is a true fan.

Four Color Zack played a super strong set proving again and again why he is the king of tone play as well as running his original productions like this years "Slap It Down". Zack always keeps it light hearted just like his personality and displays his versatility across genres not afraid to throw down some heavy metal and turning the club into a mosh pit up against super fresh Mura Masa, all while making it look effortless. Extra special shout out to Zack for playing Heltah Skeltah "Lefleur, Leflah, Eshokosha" and the tribute to Sean Price.

The decision had been made afterwards and the winner was chosen. Congratulations to DJ Byte from Chile for winning the first round of the Red Bull Thre3Style World Finals!! 🏆🏆🏆

Congratulations @bytemusic from Chile for winning the first round of the #rb3style world finals!!

The party continued with the legendary championship DJs Craze and Kentaro who killed it as you would only expect from 2 of the worlds best. We'll leave you there...

See you tomorrow to hear the full run down from round two!