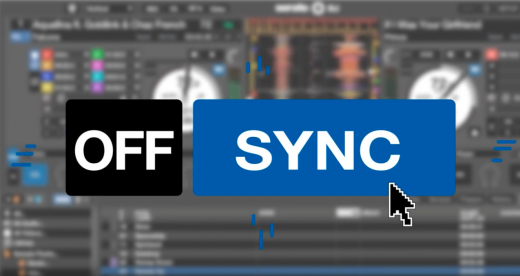 While Sync is a great tool for simply keeping your mixes in time, it also has other benefits including the ability to do drastic tempo changes to completely change the vibe of your sets.

Note: This is for using the Smart Sync feature in particular.

Whether you're looking to ramp up the energy on the D Floor, recklessly start playing hard techno or just settle the mood if it looks like your punters need a rest, Sync in Serato DJ lets you do this really smoothly. With correct Beatgrids set on your tracks, you can use Sync to have two tracks in time and adjust the pitch simultaneously for a gradual transition.

With Pitch 'n Time DJ enabled, you can also lock the root key of the tracks and it'll sound near perfect.

Say you're playing a 60 BPM rap song, and you're wanting to switch up to something a bit harder, around the 135-140 mark. It'd be easy if it was 60 >120, as you can just mix in double time but in this case as it's not a divisible BPM, you'll need to create a transition.

One way of doing this is to find a breakdown or hook section in the previous song to loop, while mixing in Sync with the intro of the new track you're bringing in. As Sync is enabled, while you start to blend, you can start ramping up the tempo which will affect both decks simultaneously.

This will work for many other tempo combinations and you should experiment to see what works well for you.