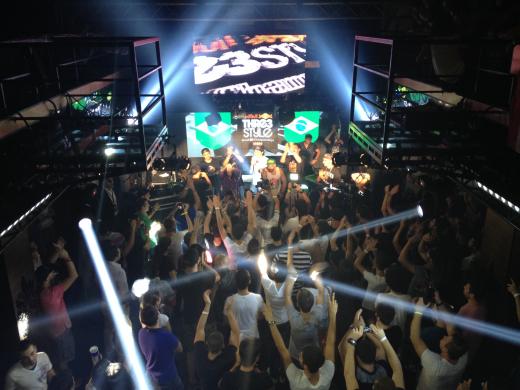 Today we had gift time for all the competitors and presented everyone with a goodie bag, which included the much sought after white promo Control Vinyl, a crispy white Serato tee, and a #veryrare and useful Serato towel (its so hot every day here in Baku) all wrapped up in the Serato tote. These guys really worked hard for those white records and i’m sure they will be treasured for years!

A couple people who had recently got their hands on Serato Flip hung around after for some practice and to get some training. We got Vancouver’s Dj Flipout and Ireland’s DJ Flip up on how to make ‘Flips’ which was tite.

After an insane feast, with more dishes than I could keep count of, we headed off to the venue for the evenings events. Here’s how it went down.

Austria’s  Kapazunda got us all pretty hyped with a mini Wu Tang set along with other personal faves Hudson Mohawk's, Chimes, and Flosstradamus, Mosh Pit. He performed with lots of classic battle techniques and some cool samples from the Simpsons classic "Duff man" character, which made for a fun and entertaining set.

Next up was Brazil's Cinada who is the sole female RBThre3style finalist. She started her set with a hilarious monologue about all things stereotypically gender related silencing the haters right out the gate. Props! Her cuts where on point and using clever wordplay proved again she wasn't going to be dismissed. Great track selection and slick blends had the girls dancing and the guys jaws dropping. With diverse and original genre choices she truly redefined the competition title.

Japan's (Ruff Ryder) Ren San came out the gate guns blazing running classic bangers one after the other, transitioning quickly through dubstep to D&B with clever tone play flips and blends. A truly high energy performance that resonated with the local crowd. Precise cuts and some subtle (or not?) shots at the previous battler showed DJ Ren was not to be f*cked with.

Kazakhstan's DJ Steppa really went in on the dub, D+B and all things Irie, which was unique and characteristic of his whole style. A Slow burning but still hype set he finished the competition leaving us all feeling blessed. If only the local laws were a little more relaxed I would say he had it in the bag ;)

Finishing the competition rounds off was local champ and returning world finalist, Azerbaijan Baku's very own DJ Twist, with a good intro and huge local support, Twist clearly had no problem keeping the crowd hype. Tight cuts and good use of the Pioneer DD- SP1, engaging the crowd and blending grunts from DJ Kool with James brown he made the hometown and friends from last year really proud. The wordplay didn't stop there, providing a literal set with in-key blends and vocals keeping the anticipation and hopes high for the final decision of the night. Extra props for using a dope Jadakiss sample to end his set, while the crowd chanted his name.

The homie and 2011 world champ Hedspin jumped up after the competition and went crazy doing what he does all so well... Ripping up the party with his flawless cuts and innovative use of the Pioneer DDJ-SP1 controller. Not many people flip the Slicer like Hedspin and I'm sure we'll see everyone catch up by next year.

Krafty Kuts tore up the place on 4 CDJs, playing lots of his memorable hits and doing a great job cutting it up too.

For the final decision, Brazil’s Cinada who brought so much personality and creativity to her performance was declared the winner. I’m telling you, it took a lot to win over the home crowd from Twist, but Cinada really came with the best set tonight.

Here’s hoping Twist gets that wildcard spot this saturday…