Detroit was super cool, and it was amazing to be in one of the most significant cities to play a part in the birth of electronic music. We were there for Movement (previously known as DEMF), a three day festival featuring some of the world's freshest new electronic music acts as well as some of the scene's legends including Model 500, Richie Hawtin and Inner City.

On the first day of Movement we were lucky enough to be invited to a BBQ brunch at Claude VonStroke's parents' place. How awesome is that? We got to the festival in the early afternoon with full stomachs and began our day of filming. Watch this space for some sweet videos in the near future. Highlights of the day were interviewing Martyn and A-Trak and checking out DJ sets by them, Jamie Jones and Mark Ernestus. Check out all the pics a couple of posts down. 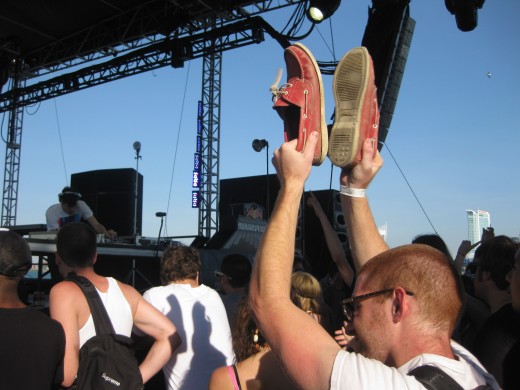 Our next stop was the I Love You But I've Chosen Techno party, which featured some really awesome DJs including Claude VonStroke, Seth Troxler, Worthy, Justin Long, Konrad Black and more. The venue was Detroit's The Works, which had its interior decked out in black, reminiscent of old school warehouse parties. The vibe was electric and tune highlights of the night included Justin Long finishing his set with ESG's "Dance" and Claude VonStroke dropping his new remix of Cajmere's "Percolator" and watching the crowd go bananas to "it's time for the perc, it's time for the perc...".

We also got to catch up and have a dance with Serato friend and legend Konix - who makes the best Scratch Live tutorials. Check them out here if you haven't already. Konix is the mantis.