Welcome 2 Detroit, aka the Motor City, birthplace of Techno, J Dilla, Juan Atkins, Moodyman and many other legendary musicians spanning from Jazz to soul, Rock to Rap, Techno to Jit.

Serato has been coming to Detroit for the Movement Festival for a long time, always putting on a workshop or throwing a party and even though we are mostly associated with Hip Hop, Open format and Turntablism, the appreciation for Techno and other associated Dance music genres is a huge passion for Serato and its employees.

Detroit is really a cultural ground zero for these genres and its always innovating and inspiring DJ's from around the world. In particular Europe. The love affair between the UK is clear as day if you look at the artists that come to play the Movement Festival over the years. Between Disclosure sampling "Detroits Filthiest" and Drake lifting an excerpt from a Moodyman set in Manchester for his hit "passionfruit"  you can see the influence even in the pop sphere.

Enough with the history lesson,

We arrived Friday to help host a workshop with our partners Roland and Ableton at the D.I.M.E (Detroit Institute of Music Education) to showcase the possibilities of using LINK. Recloose from Roland, OP! (serato) and Ben Casey from Ableton showcased this with the 3 of them jamming out on a TB 303, DJ 808 and Push 2 using multiple instances of the wireless network Midi protocol. Check out how to do this yourself here. 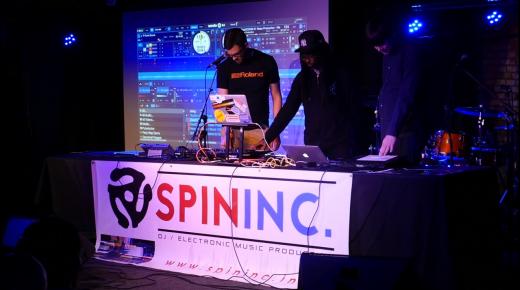 Lots of learning on the features of the different platforms were demonstrated as well. Definitely worth checking these workshops out as you leave with as much inspiration as you can handle.

Later that evening Mixmag was hosting a Live stream at the Queens bar in Downtown Detroit with incredible performances by Waajeed, Amp Fiddler and more on the DJ 808. 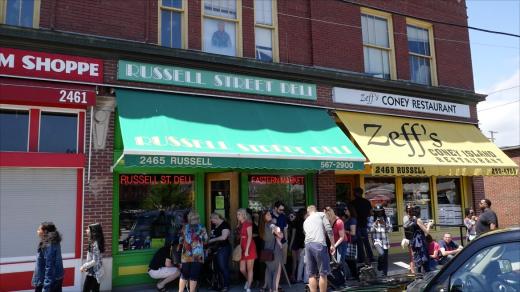 Starting the day at the Russell St Deli we made our way to the festival ground.

Checking with our friends at Roland, Pioneer, Denon DJ we made our way around the various stages. The RBMA stage is a personal fave and we caught River Tiber with an impressive live set. We saw our friend DJ Nasty aka Detroits Filthiest and the legendary DJ Godfather. Both of whom are legends of Ghettotech.

We also bumped in to Eli from Soul Clap/Crew Love who hipped us to a cool party happening later on that evening. The party was at TV Lounge and we were able to witness an incredible set by Detroit’s own rising star Jay Daniel.

It was good to see lots friends and meet up with people who happened to be in town for this awesome festival. 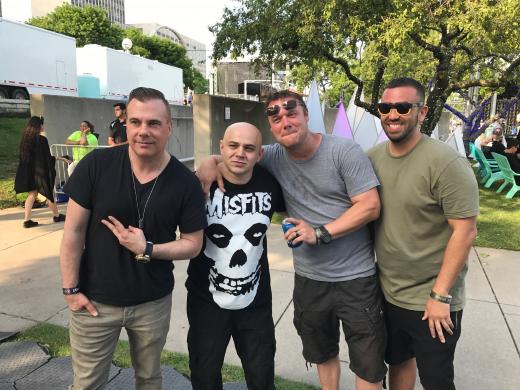 Starting off in 7 milewith one of the most filling breakfasts we met with Chrissy Murderbot who was in town from Chicago. Chrissy has just released a new record  “Cool Ranch Vol1 ” which is available here. Over catfish, collard greens, cornbread and mac n cheese, Chrissy got to see the new Serato Sample plugin. He was stoked.

After breakfast, we went to the legendary Submerge Records/Underground Resistance house located on E. Grand Blvd to visit our friend Waajeed and show him the Serato Sample plugin, buy some records and catch up in general.

This house is a must visit and you can find the best of Detroit artist’s music there, likeOmar S, Theo Parrish and of course Waajeed’s releases at the Dirt Tech Record pop up shop.

Booming out the speakers while we were there was the classic “Shari Vari” a certified Detroit classic,proto techno tune that unfortunately wasn’t for sale :/

The festival was popping and some highlights of the day were Cajmere playing the Stargate stage and Dirtybird artist Shiba San at the RBMA stage. We also caught a very cool live set by Paranoid London there too.

The weather took a turn for the worse, so there was a mass exodus from the festival to find shelter, but that left the diehards who were not afraid of a little water.

Juicy J closed the night out at the RBMA stage which was a nice switch up genre wise.

Probably the most stacked lineup of the festival, this day was bound to be exciting.

In the VIP area by the main entrance, local legend DJ Godfather was playing an incredible set of local “Ghettotech and Jit music” to start the day off. Godfather is a turntable wizard and had incredible cuts and juggles. It was an electrifying set, which accompanied the energy of the techno festival very well. Following in a similar context was Teklife who took to the RBMA stage with an explosive set utilizing the Roland DJ-808. 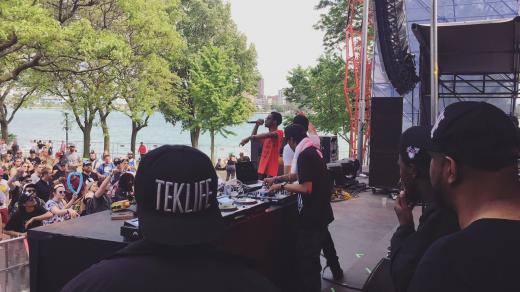 Unfortunately the weather took a turn for the worse (.. again) and during Soul Clap’s MainStage show. Their show was one for the books, and the crowd partied on, until the sun came out again. With a full live band on stage which featured Detroit’s own Amp Fiddler and matching outfits it was an Incredible performance..

Highlight of the day was Thundercat’s electric set and bass wizardry, followed by the ever inspiring Gaslamp Killer, who ran through modern west coast Low End Theory classics and Detroit inspired favorites by label mate Flying Lotus and more.

Exhausted from such an amazing 3 days, that was about as much talent you could hope for in the awe inspiring city of Detroit.

Thanks to our friends and partners, Roland, Ableton, Pioneer, Novation, Denon, D.I.M.E, Paxhau, Mixmag, Spin INC, the people and artists of Detroit and the organizers of Movement Detroit.

See you again next year.