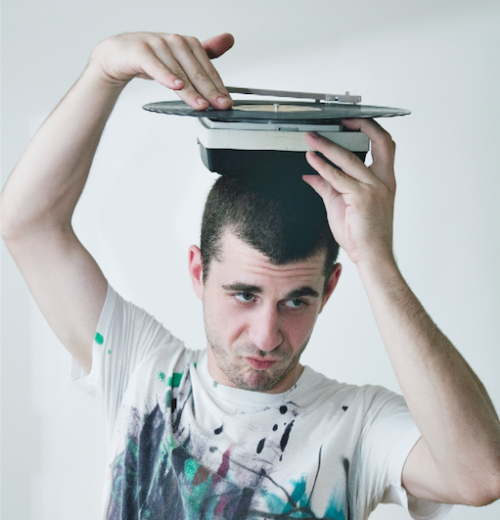 Firstly, tell us a little bit about yourself and your background?

Music has been part of my life since I was about 11 years old, performing in bands, writing songs, etc.

I started scratching in 98, and when DMC came to my old local town of Winnipeg, I treated it like I treated skateboarding competitions - just compete for the sake of playing on the terrain for the day. I took it as far as representing Canada in the 2004 DMC world finals.

How did you and Vekked get together?

Vekked added me on MSN messenger and always asked me questions. We finally met some time after he won the 2011 Canadian DMC when I was judging a battle here in Montreal which Vekked was in, and we kept in touch after that. Vekked went on to win DMC World Supremacy in 2012 and IDA in 2013, and I won the Kid Koala battle and we and we talked a lot and shared routines and ideas

We talked a lot about doing teams together since we weren't very satisfied with the types of team routines people had been doing. We wanted to try and do the type of routine we wanted to see more of in team battles.

How do you work as a team? Both in developing routines and performance?

For our recent project together we initially met up in Montreal at my place for a week and worked 24/7 brainstorming and working on the basic ideas. We focused on the things that we couldn't work on while apart. Then we would make recordings of our material so that we could listen to it apart. We also make individual recordings of each of our parts so the other person could practice over top of it when they were at home.

Tell us about some of your first battles and how you prepared?

My first battle was a conglomeration of different routines I had been trying since starting a year before. Never planned to battle, but wanted to try it out. I got 1200s only months before my first battle. I practiced every day, perfecting routines and transitions, making sure the cue marks were perfect and that I was able to do it flawlessly without skipping (pre-m447’s and serato).

I usually spend a few months just working on techniques, ideas and routines without timing them or thinking too hard about how they'll fit into a battle context... just experimenting and trying to do something cool. 4-6 months before the battles I start taking what I think are the best ideas and timing them and trimming them to fit into the time limits of battles and thinking of which will have the most impact in a competition context. I pretty much work on stuff year round, but the closer it gets to battle the more I focus on refining routine ideas rather than coming up with new ones.

We combined ideas that wouldn’t work in a solo situation. Sometimes we have ideas started on our own and other times we'd make it together on the spot. Our vocal samples are generally built together. When we cant find what we’re looking for, Soul Khan hooks us up.

How has your approach changed over time?

Using less samples, creating more of my own sounds by recording them and then manipulating them on a turntable. Im still in a transition phase with all that.

How does DJ technology help you innovate?

My PDX-3000 and Controller 1 turntable allow me to change notes up to two octaves and with Serato i'm able to perform using sounds I record instantly, instead of having to wait for test presses. That keeps things quick and easy to adapt as my live show improves.

You have a very noticeable style. What’s the key in your mind, to developing your own unique sound?

I try to focus on how to be technical while scratching melodies, all the while making sure that the melody comes across right with the scratch techniques I use. Generally speaking, I just have a sound in my head and I make songs that reflect the original thought as best as I can. When I perform my songs I use turntables to scratch the melodies and vocals

You can compare the two here:

My live show has helped develop my recorded songs as well. It's all about coming up with ideas of how you want to sound, and how you want to create music that aren't based on what you see and hear around you. See what you think is lacking and try to fill the void yourself.

Also exploring ideas you haven't seen before, just crossing your fingers and hoping some day they develop into something cool. You have to have faith in your ears and your own vision.

Who is better? You or Vekked? haha…

What’s coming up this year?

Definitely look out for some new Fresherthans routines! Vekked is focused on future battles and working on his solo music.