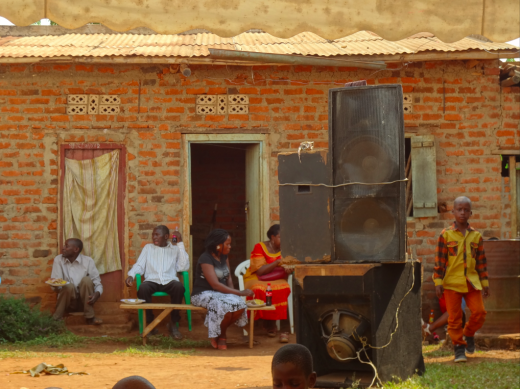 African music isn't the first thing you think when you picture a DJ from Germany, it's probably techno. Hailing from Cologne, Germany, Dogu and Kabanjak AKA Ancient Astronauts blend hip hop, trip hop and reggae into their own unique sound. We sat down with Dogu to chat about his recent trip back to Uganda and his experiences.

Firstly, tell us a little bit about yourself and Ancient Astronauts.

My name is Dogu from Cologne/Germany and I am one half of Ancient Astronauts, together with my partner Kabanjak. I have run my own label, Switchstance Recordings since 2001. Ancient Astronauts is a production duo and our music is a mixture of organic hip hop, reggae and beats. We have worked with artists such as Thievery Corporation, The Pharcyde, The Jungle Brothers, Raashan Ahmad (Crown City Rockers), Martin Perna (Antibalas), Bajka, Fort Knox Five, Azeem and many more.

How did the opportunity in Uganda come about?

My wife´s parents are both from Uganda and still live there during winter time. When we first visited them a while ago i got my first impressions of the country and some first insights into the local DJ and club scene. In Cologne i run a monthly afrobeat & reggae night and for a long time it was a big wish to play in Africa. After we returned to Germany from our first trip to Uganda I directly contacted the German Goethe Zentrum in Kampala to see if I could collaborate with them on cultural music events Kampala. They connected me to local DJs (DJ Rachel Kun and DJ Ken Mwalye) and through these guys i hooked up my gigs at Big Mike´s in Kampala.

What were your first impressions?

Where ever I go to DJ, most of the people have never heard the music that I play. I really love that. Since I started DJing I never wanted to play the hyped popular music or mainstream. I wanted to deliver new and old music that has a killer groove, maybe sounds a little familar but is mostly new for the audience. A crowd that is open to new music is the perfect audience in my eyes. When I played afrobeat at my first gig in Kampala it was interesting to see the reaction to a white guy playing african music in East-Africa. A lot of people expect a German DJ to play techno, electro or house, but I was raised with jazz and African music through my parents, so techno and other 4 to the floor styles were never really my thing. I love percussive and poly-rhythmic riddims and analog instruments. I also dig the electronics, but it has to have a very organic groove. That's what I played in Kampala together with a lot of reggae, dancehall, hip hop and beats and breaks. The people were truly enjoying it.

What gear did you take with you? Any challenges?

I usually spin with Serato DJ and Control Vinyl plus Dicers, but during my first trip to Uganda I didn't see any turntables. I knew that I had to improvise in order to play there. My choice fell on buying a controller (Numark Mixtrack Pro 2) to use with Serato DJ because I was never a fan of CDs and already have all my music ready to go on my laptop. It took me a while to get into it cause I think those little turntables on the console are very small and it takes time to get your routine to function on a controller when you have DJ'ed on turntables your whole life, but it worked out fine.

What’s the reaction to your set like? How does it differ to back home?

The reaction of the people was great.  A lot of people asked me where I was from and when and where my next gig would be. Through them I heard that nearly all the places play the same music, so it was really refreshing for them to hear something different.

For the music I play and especially the hip hop and beats and breaks there is no scene in Uganda. Even in Germany it is hard to find an ongoing scene for a kind of music that is more an international phenomena than a domestic thing. It is up to the DJ to convince the crowd that what they hear is solid dance music. Even if the tempo is not very fast.  From international touring I am used to that situation because every new gig has a new experience to it. If the crowd is open to new stuff then you still need some time to get them to feel your groove. But when you have them listening and enjoying some quality music, then they will open up to it. This is the same everywhere in the world.

How did you prepare your music for this trip?

I prepared my music not in a special way for this trip, because I knew i´m gonna play the music that I just love to play.

What did you take away from this trip personally?

For me this was a kind of new beginning because I could feel I can bring something different and fresh to Africa. Especially through the way how I DJ and how I combine different music styles. The music from Africa was always a big part of me. It is the roots of so many music genres but still so under represented. afrobeat can be combined with funk, hip hop and reggae. It was always a music that represented unity, rebellion against an unfair system and hope for me, plus a certain grounding.  To combine this with your own productions, beats and breaks from all over the world, and do that in Africa, is a big dream come true. Thinking about it inspires me already.

I try to build up my own network in Africa with DJs and clubs to DJ over there from time to time. Travelling and enjoying life in Africa just feels great and giving something back to the continent that gave me so much music and inspiration feels great.

Tell us about your upcoming plans.

Right now i am planning to go back to Uganda in June to play some club gigs and a festival. I already started working on contacts in other African countries and hopefully it will work out to travel there and play some nice gigs there in the future. In mid-July there will be the release of our Ancient Astronauts album "Themes From Tomorrowland“ and I can´t wait see the African people react to our new music. I wanna see them dance. DANZI DANZI