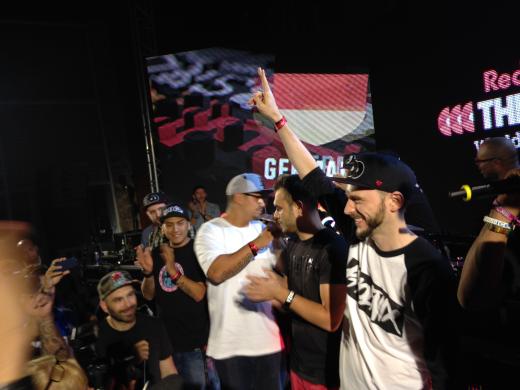 Most of the day was spent recovering as the previous night had evolved into a pool party of epic proportions. There were balcony jumps into the pool and some very early morning DJ sets by the poolside. I'm sure the hotel staff had no choice but to let the mayhem run it's course as they were severely outnumbered...

For those that managed to get sleep we had a small workshop on Serato Flip and other new features for the competitors. There were some pretty awesome hotel room jam sessions that went down too as was pretty commonplace throughout the week.

I thoroughly enjoyed the short commute of about 300 meters to this evenings venue, which was also at the hotel we are staying at :)Bazooka from Switzerland set the night off playing lots of dancehall and firing up the ladies from the "Miss Globe" pageant with Eve's classic anthem Who's That Girl and Crazy in Love by Beyoncé.

Returning finalist and all round good guy, Eskei from Germany was the first of five competitors to take the stage. He's here to win it with a slick, well rehearsed set that was executed with precision. With a wide range of genres being played, he managed to keep it cohesive and flow really well. Attempting to avoid certain cliche tracks he carefully balanced technical precision with a high energy performance that was aimed at pleasing the judges and the crowd equally leaving the stage to great applause

Dj Mickey from Albania had a hard act to follow but found his groove and invigorated the local crowd with a good knowledge of unique tracks, more popular on this side of the globe. He brought an inspired performance that was refreshing an original using all 3 CDJs.

Party animal and returning finalist Madfingaz from Belgium ripped into his party rocking set of classics, cutting, scratching and remixing with flair and tight rhythm. Playing to his strengths he used clever wordplay to weave between genres smoothly and cohesively. Adding a blazing drum performance and a variety of tracks he engaged the audience.

Peruvian champ Dejota blazed through every track, genre and maybe even song I've ever heard in the allotted 15 minute slot he had to work with. Managing to somehow fit body tricks in there as well his set was ultra high energy to the very last second.

The mild mannered Argentinian Lautaro Palenque, used creative live remixing to his advantage and managed to avoid played out tunes which was definitely a challenge being the last to the stage, kept it cool and augmented his set with tasteful cuts. A few loose mixes held him back from a chance to make it to the final round but it was a strong set that would be sure to rock a party anywhere.

Reigning champ Shintaro from Japan who killed Toronto last year with a well curated set used this refined technique to great result with exquisite tracks that were refreshing and invigorating. Smalltown DJs and Grandtheft's - Flying was a highlight, mixing into fellow Red Bull Thre3Style alumni Hedspin and Fcz's Freekin You remix. It sounded awesome and Shintaro kept it consistently banging throughout his whole performance which the crowd ate up 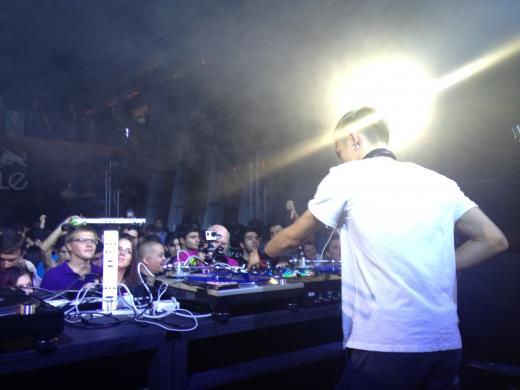 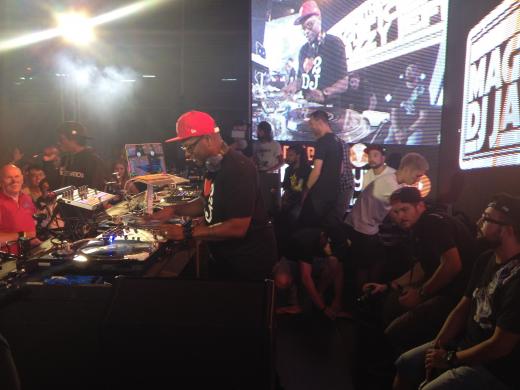 Everyone was excited to hear the magnificent DJ Jazzy Jeff, accompanied by MC Dayne Jordan, who had the crowd chanting his name. Jeff got right into showing what it means to be a DJ using slick techniques he not only pioneered but innovating with even more tricks for us to try and emulate. Digging deep into his vast collection of rare versions of classic songs, he kept me asking, "How the hell did he get this?!" Wouldn't we all like to know... At the same time Jeff does what he always does so characteristically, which is introduce new artists and producers material, staying not only relevant, but so essential to the DJ community to which we belong.

Jeff was joined onstage by Skratch Bastid who blew the audience away with his insane cuts, showcasing them over one of my fave tracks, Nadus' Nvwvrk. Combined with their chemistry the two of them made for an amazing end to the evening, which was sure to continue again by the poolside whether or not the hotel staff wanted a quiet evening.

At the end of another fantastic night it was announced the homie Eskei83 would advance to the finals yet again for another shot at the title of Redbull 3style world champion, which would be yet another flag in Germany's cap...

Check back tomorrow for the finals at the Crystal Hall in Baku, Azerbaijan.