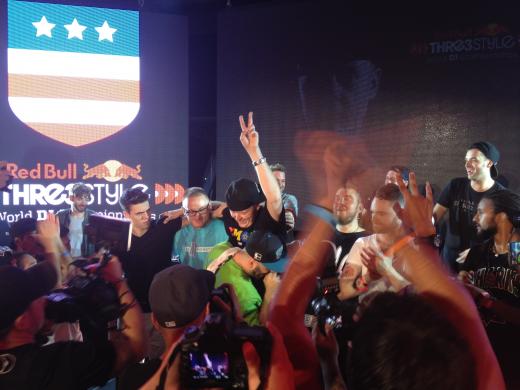 Today started with an in-depth discussion about the history of edits, mash ups and remixes. It was hosted by none other than Z-Trip, Jazzy Jeff, Krafty Kuts, Hedspin, Four Color Zack and Skratch Bastid which made for an incredible shared wealth of knowledge and some incredible stories.

They covered everything from the origins of edits, cutting tape, pause tapes and Simon Harris breakbeat records, all the way up to midi mapping, tone play and software technology pushing the  culture forward to what it is today. Flip?

The discussion concluded with everyone agreeing that track selection is the single most important part of DJing and how edits and remixes can open up those possibilities for you to play songs that you may not otherwise be able to play, helping bring style and individuality to your sets. 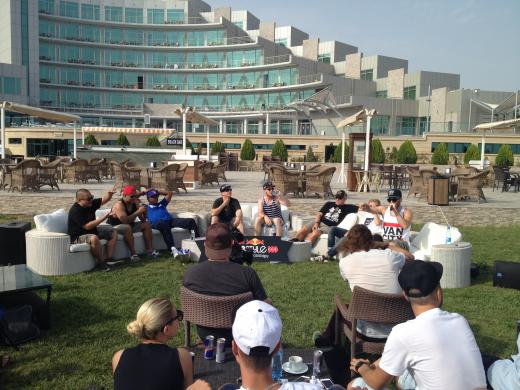 The night began with last years finalist , DJ Byte (CHILE) who played a great set that highlighted his creative style of DJing that got him through last year.

The first competitor of the evening was Bulgaria's, DJ Mario who seemed to have some trouble getting started but played it off well and got his flow on. Once he was in, he was rapidly running through an impressive bag of tricks. Pulling fun pop references from arcade games and cartoons he finished off with the classic "that's all folks"...

Latvias DJ Monsta was up next and played a really tasteful selection of cool tracks. He used a nice display of body tricks doubling Diplo and Nicky Da B's (RIP) anthem "Express Yourself" and switched up genres tastefully as well. He also use the Rane Sixty-Two to its full potential, accessing the on-board FX / filters and executing his mixes and cuts clean. Extra points for having the balls to play "Doing It Right" by Daft Punk at the finals too!

Lucky Bastid winner Trayze from the USA came out with a very melodic start that was effective in giving him a good base to build on. Strong song selection won me over early with less obvious choices like Kaytranadas flip of Sock It To Me and Man Of The Year mixed in well with crowd pleasers like Happy - making for a diverse and accessible set for heads and the punters too. It felt like he had a sure shot at taking the finals early on.

However he did  play "backstreet boys" which the crowd loved but made me a little uncomfortable ;) He made up for it by being the first contestant I think I've heard play a Pusha T solo tune in a finalist round.

ProBASS from the Ukraine jumped right into a rocking set with heaps of energy and great stage presence. His set wasn't the tightest at first but he did some really cool drum routines and had one of the more diverse sets. He brought a lot of personality to his performance that was sure to resonate with the judges.

I should also add that ProBASS was one of the more individual competitors this whole time with some pretty unique hair and dress style. I know that's totally not DJ related but sure to get props from the fashion killas

To end his set ProBASS took the opportunity to create awareness about the current situation in his homeland by holding a "stop war in Ukraine" sign. The crowd was clearly moved an he receive a standing applause for this act of nobility.

Flip ripped right into his competitors... DJ Trayze probably got the worst of it. Clearly not out to make friends he tore through tracks smoothly with some very precise and high energy cuts. Flips stage presence was kept at 100 the whole time, which was really necessary considering who had performed just before him and the crowd was eating it up. Animated body tricks and single handed doubles added to an already impressive performance and it looked like the night was going to be a tough one to judge with the level of competition on hand this evening.

Four colour Zack stepped up for the showcase set tonight and simple killed it as he does, every time. Knowing the right tracks for the Baku crowd while retaining his exquisite taste in music both new and old. Zack also has some of the smoothest transitions you'll ever hear always mixing in key and cutting things up in just the right way so it's never obnoxious and augments the performance. These all make sense when you consider why he's the 2012 world champ. 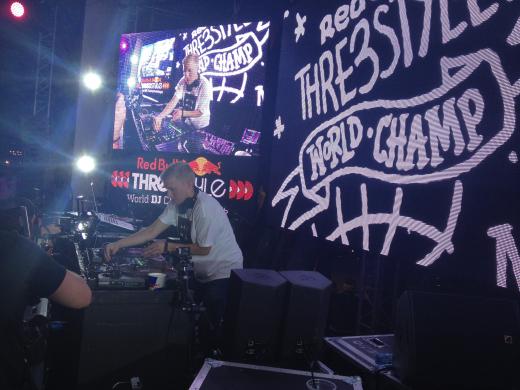 The night was somehow taken to the next level with Z Trip taking to the stage. It was everything I remember loving about a Z trip performance with funky as hell cuts and innovative techniques. Playing every Def Jam bit you know and love, Z trip still has us all inspired.

By the way, how did he get all these acapellas that I didn't know even existed!?

Everyone was on stage and totally in the zone with Z trip. The icon doesn't take any shorts with his live performance, staying turned up for full duration of the set and even more for the encore.

Finally it was deliberation to see who would be the 3rd finalist to advance to Saturday. It was decided that Trayze from the USA would be a lucky guy once again.

Check back tomorrow to hear who the last finalist to advance will be...