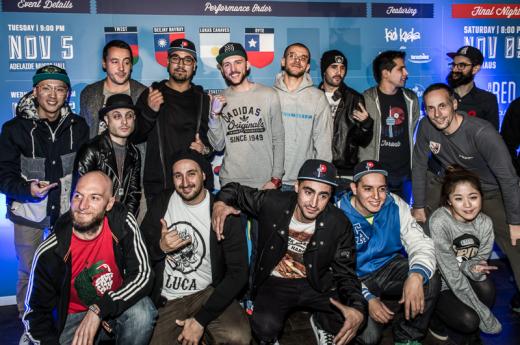 The 2013 Redbull 3style World Finals are taking place in the biggest city in Canada - TORONTO. Home of the Maple Leafs, Raptors and the Drizzy Drake. The Serato Team found ourselves at the Thompson Hotel, the home to all 17 competitors from around the world alongside a wide array of guests and performers, playing throughout the city this week.

Today was the draft pick for the competitors. Hosted by Canada's own Skratch Bastid and with the help of Jazzy Jeff, he had the honours of randomly selecting the finalists from a sorting hat (literally). The finalists were then able to choose the night of the week and time of the night they would play. The final name drawn was DJ Inferno, who unfortunately had not arrived and had to be phoned in by Skratch Bastid live. After a little confusion, he was sorted out.  Over the next four days these DJs will compete, with the grand final taking place on Saturday.

With the line up now drawn, this is how it looks:

Later on that night, everyone headed to the Drake Hotel (no, not Drizzy), where a line up of awesome DJs were playing. Upstairs DJs (Flipout, Hedpsin, Cosmo Baker and Smalltown DJ's) where spinning an all 45's (7" records) set of rare old school joints like Ponderossa Twins, The Emotions, D train etc, while downstairs The Magnificent Jazzy Jeff tore it up with a selection of classic jams, such as Eric B and Rakim, James Brown, and some interesting remixes (like a latin verison of Crystal Waters). Four Color Zack killed it with his trademark tone play and wordplay work utilizing Chaka Khan's "Ain't Nobody" into Kanye West's "Clique", while Local hero Grandtheft ran through a bunch of his own productions like "mobbin", and Twerk anthem "Miley"

Lots of good vibes and local producers and artists in attendance, giving the out-of-towners a warm welcome.

Stay tuned for more tomorrow, where the first round will take place along with a video set by Shortkut of the Beat Junkies. We'll keep you in the loop on who wins and the hot tracks.