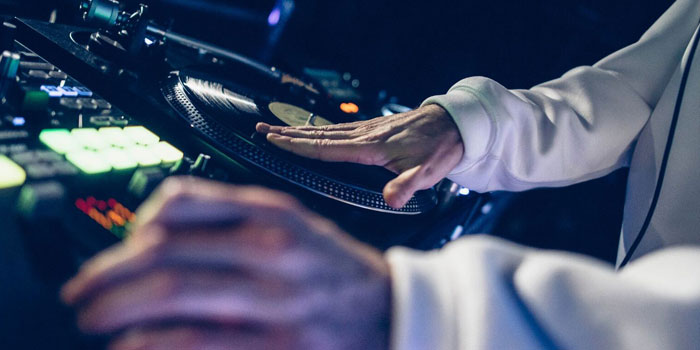 Qualifier number 4 of this year's red bull 3style world final this evening takes place in the largest venue so far. We are at Studio 6 in the West Of Krakow, Poland for the final night of qualifiers. One more DJ will take their place in the Grand final tomorrow evening!

We kick off with sets from Gafo and Thugli and they set the tone nicely for the evening ahead.

Marquinhos Espinosa of Brazil gets the competition underway and sets things off nicely with a tight mix of dubstep and hip-hop. Big Shaq also makes a sneak appearance in his set! He also drops George Michael - Careless Whisper and does some pretty sick synth tone play using the S9. Dope stuff.

Ryan The DJ representing South Africa is next to take the stage, starting his set with the theme of The Lion King, which goes down well with the crowd and judges! His set is super tight and clean, and he mixes some pretty unusual tracks with some more familiar ones with style. He seems totally calm on strange, impressive considering the occasion. A strong contender for tonight’s title!

Dr.Fad-R of Switzerland then blesses the crowd with a party hip-hop heavy set that includes everything from Lordz Of The Underground to Mobb Deep to LL Cool J. He switches it up towards the end of his set, dropping some seriously bass-heavy remixes of some classic hip-hop, which works surprisingly well!

Mexico is the next country to represent, with DJ Jimmix throwing down. Some of the dopest tone play seen in the competition is sprinkled throughout his set. Tom Jones - "It’s Not Unusual" is then followed by Ludacris - Move Bitch. Selections like this have not been abnormal in the competition this week, and the way these competitors manage to make transitions such as this sound coherent is precisely why they’ve made it through to the world finals. Tom Jones into Ludacris.... incredible.

Germany’s DJ Remake was the penultimate DJ tonight. He started his set by stating his opinion on the leader of the free world. Let’s just say, the crowd agrees!

His set contains Plenty of finger drumming using the Pioneer DDJ-SP1. A highlight is a routine with Kris Kross - Jump, seriously dope.

A beat juggle that gets the crowd hyped and dancing, not something you see very often, stands out amongst a great set. Again, he executes some of the best finger drumming I’ve seen in the competition so far.

Our final DJ tonight, and of the whole qualifiers, is Beast Mode from Australia. His set is dope from the jump! There was also some laugh out loud moments that go down well amongst the heads backstage!

This set is high energy throughout. Executed with class and precision, this may be the best set of a very impressive evening of DJ’s.

Some seriously aggressive wordplay halfway through his set emphasizes the fact that he is here to win...

He still has plenty of time to fit in an old skool jungle section before walking to the front of the stage at the conclusion of his set.

The judges have a hell of a job picking a winner tonight...

The winner of the last Red Bull 3style World Final DJ Puffy takes to the stage and shows us exactly how to balance a club set with perfect track selection and technical skill. A master of his craft.

Tonight’s title goes to Ryan The DJ from South Africa. A worthy winner in a seriously tight competition!!

See you tomorrow with the final night of competition!