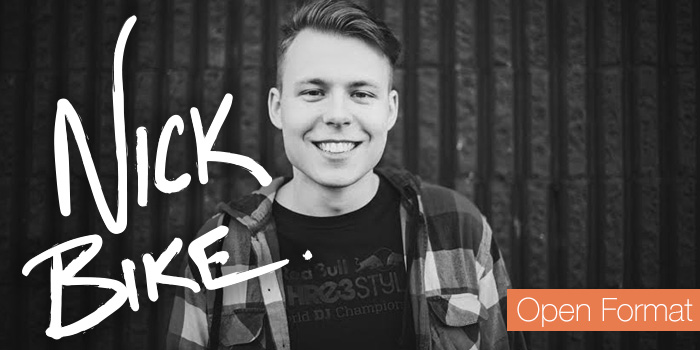 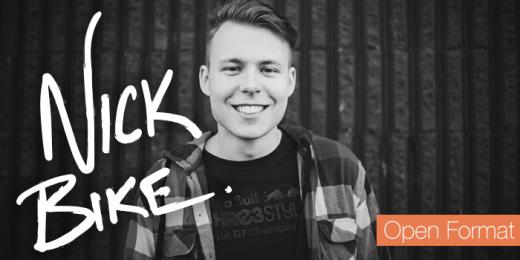 Check out Nick Bike's SeratoCast at the Mixcloud link below and have a read through the quick catchup we had with the man.

Tell us about this Seratocast and what you were thinking of when you made it, what was your setup etc?

I wanted to package my overall style as concise as I could in 50-60 minutes. To do that I had to include some tunes I first started listening to that engaged me towards dj’ing, brand new music, my own edits/remixes, and 45 material since I rock the 7s every week.

You're known well for your DJ Edits, Tell us what or who got you started making edits?

I was always a big fan of JayCeeOh mixtapes. Pop Models series was great because he would always give out edit packs with the mix. I would be able to kind of ‘reverse understand’ how and why he would use/create these edits to make the mixes sound like they did. The guests he had on Super 7 were also big inspirations - Skratch Bastid, Cosmo Baker, Eh! Team DJs, U-Tern… All guys who I followed on the Hollerboard as well - Audio1, Isaac Jordan, etc. I realized after following these people that I could build my own style of dj’ing and enhance my sets.

I understand you quite like making records and buying them too. What was the first piece of Vinyl you bought and where did you get it?

French House was my first love, but I lived in Prince Edward Island (small Canadian province) and there was no chance I was going to find any of those 12s there. So my first piece was off Discogs - it was Buffalo Bunch/Take It To The Streets.

You have been in the Redbull 3style and done very well being Canadian Finalist twice now. What would you say was the best experience of the competition?

There are a lot of great aspects of 3Style - comradery between other DJs and people involved, personal discipline, the satisfaction of having a completed set in the end.. you learn a lot about yourself and your DJ style when you have to focus hard on one single project like this. Without a doubt, it makes you a better DJ.

What are you working on next? eg More edits, Production, new mixes?

Always edits and mixes, but trying to get better on the production side. I’ve had a couple opportunities to remix major label projects that haven’t worked out to the extent of seeing official releases. To see one of those get the green light is definitely one of my next goals.