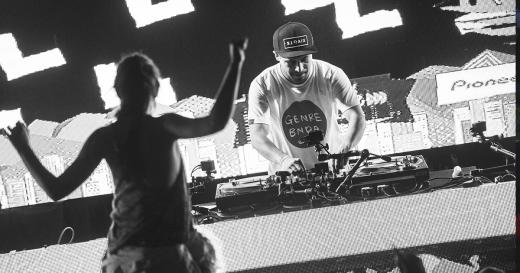 During the day Pioneer and Serato held a panel discussion hosted with DJ City. Moderated by Styles Davis, the conversation started with all 3style champions: Karve, Hedspin, Four Color Zack, Shintaro, Eskei83 and reigning Champ DJ Byte. They discussed topics such as how they prepared for their sets, how winning the competition affected them and what it means to be a champion. A very insightful look into the discipline needed to make it to the top. 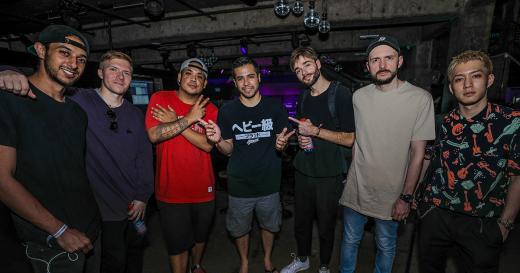 The second panel gathered all the judges of this week: Nu Mark, Mix Master Mike, Jazzy Jeff, Z-Trip, Skratch Bastid and Craze. Great discussions were had on the pressures of fame, how to stay inspired and relevant, or how to handle the stresses and temptations of the road without sacrificing time spent with loved ones. A lot of wisdom and gems to be taken away from the talk. The younger generation was extremely happy to benefit from all the advice of these prestigious veterans. 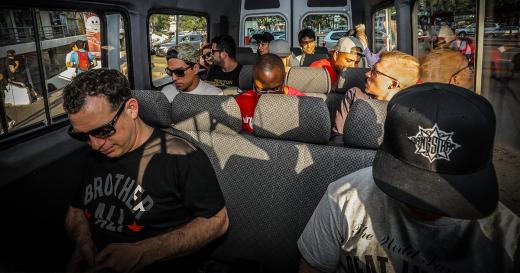 The night event began with Santiago heavy hitter DJ Bitman. Then 2014 Champion Shintaro from Japan stepped up and performed an incredibly well curated set of tracks. New heat like Travis $cott's "Goosebumps" and new routines with wordplay show Shintaro has been really growing since being crowned champion. He continues to hone and perfect his style and character. A man of few words, his personality speaks volumes.

BeastMode - AustraliaThe energetic Aussie set off with the unofficial anthem of Ozzie Ozzie Ozzie Oi Oi Oi and hyped the crowd up immediately. Relentlessly throwing every ounce of energy he had into his performance, he didn't let up the whole time. Strong cue point drum performance and high energy cuts really made for an electric performance. His set contained a lot of very familiar party anthems which would likely cost him points with the judges but the crowd were very receptive to these. His charisma really sold the overall performance and he lived up to his namesake. The hearts of the crowd were totally won when he ended donning the cap of Chile U football club. Trims were definitely all the way up for the Australian!

Pro Zeiko - GermanyThe elusive German had been very incognito around the hotel and you would be right to assume he was perfecting his set for tonight. He delivered a highly conceptual set, based around the four elements (no, not hip hop). Starting with fire themed songs, then water adding some novel hardware like a bubble machine it was a peculiar approach to a competition. Original? Yes, but effective? Not so much. There were some good highlights that were very entertaining like the live trap remake of Darude "Sandstorm". The blow up globe Pro Zeiko threw into the crowd proved to be a distraction for a while until he unplugged his computer and proceeded to state that he didn't need a laptop to rock a crowd and smashed his laptop live onstage!!! The crowd was ecstatic at this incredibly dramatic move. Performing the rest of his set valiantly on vinyl with clever juggles and classic party jams Pro Zeiko had made a huge finale. Probably one of the most theatrical performances ever in 3style. But what was he going to use for the grand finals though!!? Oh my gosh.

Ruse - New Zealand
From the land of the long white cloud (and Serato) Ruse started with a classic New Zealand hit "Slice of heaven" by Herbs and Dave Dobbyn, flipping it into transition to Latin flavoured tunes that engaged the local crowd, Ruse then progressed through tasteful cuts by Troyboi, Keys n Krates to classic Biggie, Snoop Dogg. Using clever wordplay and a very cool pitch play from Martin Solveig's "Hello" into MIA's "Paper planes" made for some great highlights. The quiet but confident kiwi had plenty of tricks up his sleeve and routines to spare and had the crowd dancing on stage. With the party turned on he brought out other choice cuts that were refreshing. His clever creative transitions such as the Godzilla theme flipped to the melody of TNGHT's "Higher ground" showcased his personal flavour which the crowd was eating up... ending with sing along anthem "Purple rain" in tribute to the fallen musical genius Prince. The good vibes of his set were a welcome addition to the whole competition. Ruse was simply so stoked to be here, as were the crowd.

69 Beats - PolandThe technically efficient and precise 69beats was all about the live remixing and had plenty of ammunition with his setup. Blazing cuts and drum routines with the DDJ-SP1, he maintained the high energy level of the night. 69 used his midi keyboard on stage to play melodies which was very original. Ending with live drumming jungle and drum and bass rhythms, this blazing set was extremely technical. Even if the music choices weren't big hits, his performance was so entertaining the crowd gave him a fantastic reception as left the stage. Once again this Santiago crowd was awesome!

Flink - Switzerland The Swiss OG also brought a midi keyboard to the stage and the guy had chops! With a melody solo into Sango's "Indian flute" (Timbaland flip) the crowd was cheering him on for more. A very relaxed Flink calmly proceed to run some dub plates and strong tines that really resonated with the audience. Great vibes were had with this irie set, blending in plenty of reggae, dancehall, drum n bass and well placed Latin joints too. As illustrated by a live remix of Missy Elliot's "Get your freak on" and ODB's "Shimmy Shimmy Ya", this dynamic set was mostly performed all the way live! Ending by climbing up on the table and performing a drum solo with his midi controller on his chest was a charismatic move that made for a engaging finale.

Trayze - USAThe returning USA champion came all the way from the nation's capital of D.C. Trayze set off the set with tasteful classics and referenced the best highlights of his winning set in Philly. Favoring the cooler less recognized tunes of other competitors Trayze had a set for the heads. The crowd enjoyed these but maybe didn't get the deep cuts cultural relevance in the USA until Trayze cleverly dropped the "FDT"by YG and a cool Simpsons skit.

Performing the OG Genasis "Cut It" jersey club live remix into his Kanye "All Day" - Sade "Smooth Operator" routine is always impressive to see live and was executed perfectly. A fantastic set and performance, that was just over the heads of the local audience.

Santiago's hero and world champion DJ Byte took the stage. Byte had been the most gracious host to all of us and barely had any time to himself this week. To see him perform such an amazing set for his hometown on this momentous occasion was so heart warming. The electric crowd was proud and fully supportive of their champion.

The judges had made their decision and the hero from down under came out on top. Congratulations to Australia's Beast mode for making his way to the Grand Final!

Tomorrow we'll see all 5 finalists battle it out inside the Velodrome of the National Stadium!