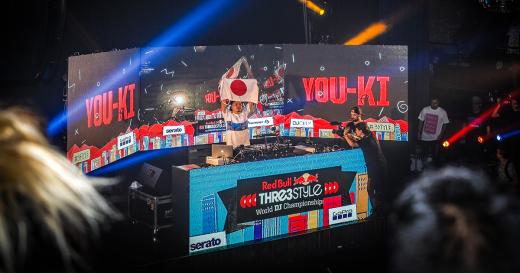 Starting the day's activities at a leisurely 3pm allowed most of the 3style to catch up on some much needed rest. Everyone at the Hotel Manquehue plus some guests gathered at the practice room to jam together with the catalog of the legendary "Ultimate Breaks & Beats". If you aren't familiar with this collection you would be wise to go get it immediately or risk getting the right to call yourself a dj revoked ;)

Hosted by the charismatic Skratch Bastid, we were treated to incredible performances by the judges panel, competitors and some special guests, Vekked, Ease and some local heroes. Check out our Snapchat story for a couple of highlights. 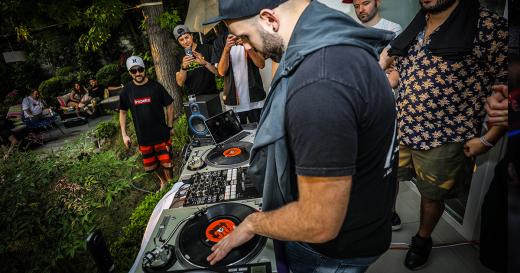 The venue for tonight was Club Chocolate, in the bustling Bellavista neighborhood.

Chile 3style World Finalist (2012) DJ Drummer set the event up with an incredible innovative and entertaining set. Proving that the hometown was very rich in talent. 2011 World champion and Canada's own Hedspin took the stage and quickly offered the club one of his trademark energetic and tight sets, the ideal lead up to the night's competition round. 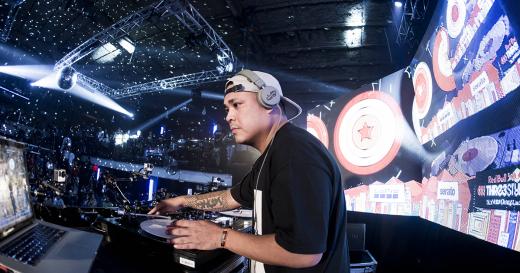 Now on to the competition!

N.E.Z - Azerbaijan
Returning world finalist from Azerbaijan, NEZ began this set with a well programmed selection of strong tracks and used a selection of word play, tone play and some beat juggles to establish the the vibe. While the execution could have used a bit more polishing you could follow the narrative. A well humored and fun set, NEZ had really honed in developed a lot from last year. Good track selection overall, and the awesome tone play of East Flatbush Project's "Tried by 12" to Sting's "Shape of My Heart" (also sampled by Nas for "The message") was an impressive way to end his set.

Busy Fingaz - Austria
Began with a very cool recording of the Chile "chant" and cutting over some menacing horns got the crowds attention. Very unique remixes and clean tracks were very welcome. Busy Fingaz paid homage to Phife and augmented this with some clever wordplay. Good cuts were peppered in throughout as well. Humorous sound bites from Christopher walkens SNL cowbell skit livened up the mood.

An unfortunate sound outage mid way through his set didn't throw him off and if anything won the crowd over more, as he continued to run through his set. Appropriately running Skepta's "Shutdown" was precisely what he did to the sound system!

Ending his set with a slew of dub plates calling out his competition battle style,  savage cuts over a D&B anthem and an oh-so-Austrian accordion remix of Justin Timberlake's "My Love" bookended a well performed and tasteful set. Tough competition for the others to step up too.

The crowd was primed and enthused all the same and didn't care the sound had cut out upstairs. Wouldn't it be great if all crowds were this supportive?!

Dinpei - Taiwan
An energetic Dinpei had some impressive toneplay routines that were original and didn't feel forced at all. His set was all very musical and in key. Running rap standards and pop hits by Beyoncé, Dinpei had a great club set for tonight.

An innovative live drum routine was an early highlight of the set. The crowd and likely judges too would look favorably on this come deliberation. Moving in to more uptempo jersey club rhythms was a nice change up, and after calling out his competition he moved into some classic breakbeats. Highlighting his incredible drumming skills he showcased this one more time before moving into a Latin set and finishing with some nice cuts over some future bass remixes.

Jimmix - MexicoJimmix was very warmly welcomed by the Chilean crowd, and proceeded to deliver a well mixed blend of Beats International's "Just be good to me" and Snoop's "What's my name". Displaying body tricks and word play, Jimmix was aiming to score points with the judges here too. He looked very comfortable up there as he worked through party pleasing tunes and clean cuts.

The track selections were working for the crowds but weren't anything new to the competition and wouldn't score him well as track selection is 20% of the scoring criteria. Jimmix ran through a series of pitch play and tone play, some of which were strong, others less so, but the clever blend of "La Bamba" and "Black and yellow" by Wiz Khalifa was a good highlight to end with.

Bomber Selecta - ThailandBack for another shot at the title after performing strong in Japan last year, it was good to see the irie Bomber Selecta again. Fully masked up, Bomber started off with some Bruno Mars and old school rap, progressing naturally into dubstep, trap and some big hits, he easily won the crowd over. Working his skill set, Bomber had the word play on point and clever transitions. He broke out his newly acquired exclusive Chile 3style Serato control vinyls and cut it up with precision.

A big reggae fan, Bomber brought out the dub plates towards the end of his set, showcasing his personality nicely to finish with a nice outro with GZA's "Shadow boxing" and "Under me slang tang" by Wayne Smith for one of the most impressive word play/beat juggles of the night.

DJ You-ki - Japan
The crowd welcomed You-Ki with applause and You-ki reciprocated with a great high energy introduction. At this point in the night I don't think anyone needed to hear any more tone play, but You-Ki kept it classy and made sure to use it sparingly and to good effect. The energy was maintained and You-Ki had the right tracks for the crowd to keep them singing along.

You could certainly tell he had a deep knowledge of the right cuts to play, and a plethora of skills and routines to get him to the final round. Everything was performed with precision. You could easily listen to this set again outside of the club. Nods to the judges with a quick routine of "Peter Piper" was a bold move and following it up with a similar move to DJ Byte running through a bunch of tone play based on Jackson 5's "I Want You Back". It certainly looked You-Ki might have this in the bag! Finishing with some body tricks on the DDJ-SP1, this tight routine was cemented as the best of the night, at least by the crowd at this point as You-Ki left the stage to rapturous applause!

Result - without much time needed for deliberation, Japan's DJ You-Ki was announced as the winner! 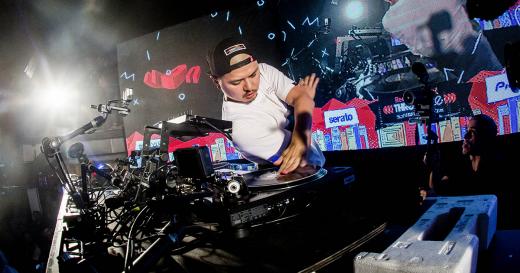 The night ended with a powerful set by Mix Master Mike, who started off by downing 3 cans of Red Bull in a minute. His energetic set combined Beastie Boys classics with fierce recent beats and Mike's very own scratch techniques. Let's hope he got some rest after such an intense performance!

Check back for our final 3 Style blog tomorrow!