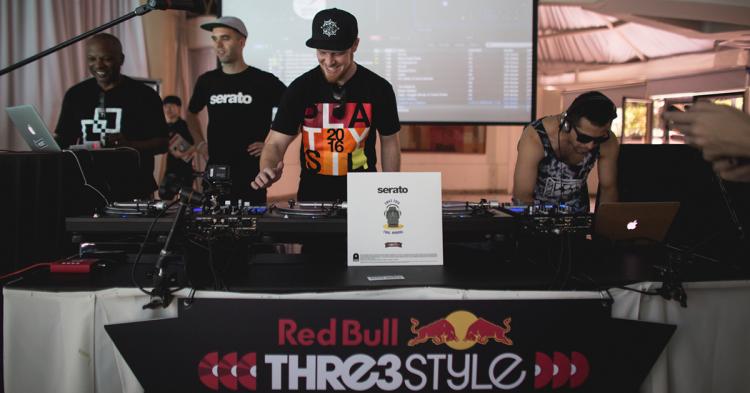 Today was a busy day for the Serato squad! We had a live streaming workshop with world champ DJ Byte and Serato's pal, Kutcorners in Español and English. We also had a private competition for the finalists and 3Style participants. The concept of the competition is what we call "Rip n Flip". We gathered 4 tracks from the digging session at that secret shop we visited on Sunday, ripped them into Serato using the "Record" function, put them on a bunch of USB keys and then got everyone to use the FLIP feature in Serato DJ.

The rules were very simple...

After they were shown how to use the flip feature and got the tracks they would have 1 hour to make a Flip and then come back to perform the Flip. The results were fantastic with some very impressive beats made.Jazzy Jeff, Hedspin, Skratch Bastid and Nedu Lopes were the judges who decided who would win, and Vazee (last years finalist from Poland) took home the prize pack of some exclusive wax and a nice bottle of Pisco (the local drink of choice).

It wouldn't have been possible without a huge help from the good folks at Fokus Productions. Big shout out to our friends for helping us out!


Off to the Bunker for the nights events.

Eskei83 ripped in to a incredible set showcasing his in depth knowledge of classic hip hop and today's finest gems, including some of the latest releases from Crispy Crust. A great warm up for tonight's event!

DJ A - Brazil
DJ A (pronounced "ahh") had the task of opening the second round. Starting strong, and choosing a plethora of genres with a strong Latin and tropical influence he was repping strong for the South American audience while keeping it familiar to the northern folks in attendance as well ;)

Utilizing tone play, cuts and other beat juggles to gain points in his set he performed a well rehearsed set that increased in energy as it developed and "A" ended with songs you can tell he really knew and it was refreshing to hear some Baile funk to end his set. Definitely a crowd pleaser leaving the stage to a crowd chanting his name.

Stresh - France
Stresh set the night off asking for the crowd to put their lighters up, which of course they abided, and stresh proceeded to cut it up. A very skilled scratcher he made sure this would be something he would be known for.Tasteful song choices made for a classy and effortless set. Busting an impressive juggling routine while making it look so easy was another example that Stresh was a talented tuntablist. It took a little while to establish where he was trying to take the set but it came together a lot more towards the end but didn't end super strong.

Bonus points for playing Sango though!

Puffy - Barbados
Not wasting any time to call out his competition Puffy came out guns ablaze. Instantly winning the crowd and bringing the energy up in the room he had everyone's attention. Repping strong for his hometown of Barbados he brought the tropical vibes and incredible energy in his performance. He was literally jumping and somehow managing to execute most of the tricks he had planned minus a couple slip ups, would it be enough to lose favor from the judges?

He pulled out some local heat including cumbia and salsa classics with the dance moves to match. It all worked very well with the soca and tropical sounds from the first half of the set. Bookending the high energy set with the classic bob Marley tune "no woman, no cry" and a cool melodic scratch solo was a perfect finish to a unique set of refreshing music. It certainly felt like this was an incredible night of competition that consistently was progressing with the evening.

Delta - Italy
It was cool to see Delta take the stage to a totally different sound. With stadium rock anthems like Joan Jett's "I love rock n roll" he brought his flavour to the show.

Working the crowd and progressing from the rock anthems to big room anthems like dj snake and Dillon Francis' get low his set had a good flowing narrative.

Delta was clean and everything was timed out very well.Sadly the crowd wasn't as engaged in the set, despite the technical prowess on display. Delta had a great set for the judges, but he would have earned more points from the crowd had he focused a bit more on the local sounds, proven after he slipped in a few Latin American classics towards the end of set.

Ches - Spain
Spains Ches knew what was up and how to bring it for the local crowd setting it off with classics for the Spanish speakers.

Moving into contemporary hits that were refreshing as I had yet to hear a lot of her choices played. Quickly moving through big tracks with high energy and flexing with juggles, tone play and cuts, Ches proved she wasn't half stepping technically either.

Transitions were one thing that held her back on the technical points, but the crowd loved the drum n bass she threw in the mix.

The final competition tonight was Cross and this is no easy place to play. You've got to do something that is leagues ahead of everyone else.

Cross is a seasoned vet and has no problem demonstrating his precise cuts upon the 3style stage. Needing to bring the big tunes Cross had a set full of good and well known tunes. Peppering an incredible beat juggle routine and flute play (is that a thing?) of "Indian flute" , Mura Masa was pretty cool.Sound quality wise Cross had good control and clean clear tracks, one thing that was missing from some other competitors tonight.

Not as charismatic as some of the other competitors Cross wasn't concerned with making friends with them either by calling each of them out toward the end of the set. It is a battle and to be expected though.Bringing out the chilean flag to finish his was an attempt to win the hearts of the crowd. Noble, but was it enough?
2c the super duo of Four Color Zack and Craze took the stage while the judges decided who would advance to the finals. Craze and Zack ripped through their own tunes and routines juggling and flipping tracks by Artists like Troyboi and HudMo.

Innovative pitch replay of the melody Lauryn Hill sings in "If I Ruled The World" has to be the most creative use of control tone I've heard. It's really impressive to see the chemistry between these two masters.

Result:  it was clear the winner was DJ Puffy from Barbados!

Check back tomorrow to see how round 3 plays out!