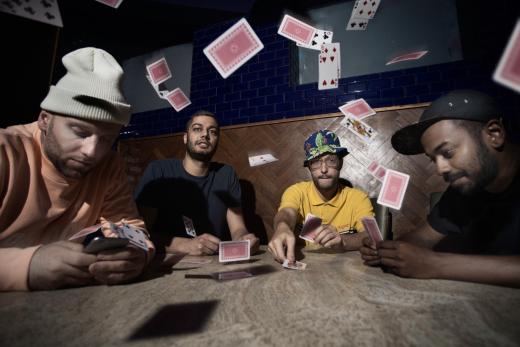 The Livin' Proof team have been in a mainstay in London's nightlife with their well known hiphop party by the same name. Comprising of four friends, we catch up with guys in the third instalment of the UK Special Takeover to talk music and their DJ chemistry and style.

You guys have been a mainstay in the London nightlife lexicon for a minute - tell us who Livin’ Proof is and its Origins.

Livin' Proof is Snips, Budgie, Khalil and Rags. We’ve all been friends for the best part of 15 years and LP was started really by accident as just four friends playing records we loved in a small bar to pretty much no one.

We’ve had people describe your party as a “religious hiphop experience” - how much emphasis do you guys put on being ahead of the curve musically?

Actually I don't think we really try to be ahead of the curve so to speak. We don't try to keep up with trends in music at all. We really just play the stuff we like and I guess that resonates with people. We all have slightly different tastes also, so between the four of us we cover a pretty wide range of stuff.

There’s always a seamless flow at a Livin Proof party. Tell us about your chemistry as a DJ crew - is there a particular format you work in? Or is it just off the cuff?

Its pretty much off the cuff but again, with all of us having quite different tastes in Hip Hop, we seem to cover all bases between the four us and I guess it turn that caters to the crowd.

You’ve had a number of awesome guests play and appear at Livin’ Proof - any highlights/stand outs thus far?

I think ASAP Rocky was the turning point for us as he was our first major guest. Danny Brown also had an insane show where I still believe his ability to perform after his “before show snacks” is definitely a medical anomaly!

Tell us about your involvement in the upcoming Rinse FM | Born & Bred Festival at Haggerston Park - can we expect more of this in 2016 & beyond?

We're looking forward to hosting our stage this summer. We’ve got a great line up on our stage as well. We definitely plan on becoming a little more active on the festival circuit too!