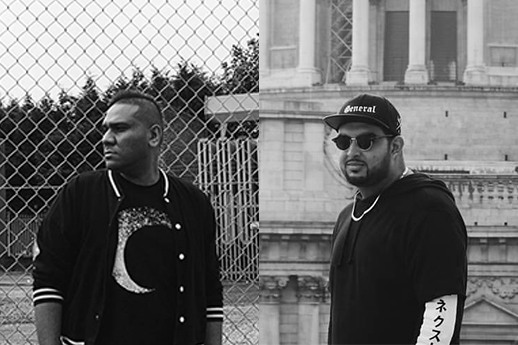 In the second instalment of our UK profile series, we catch up with our friends Yaz Beatz and Complexion from Future Beats Records. Considered the leaders of the new school sound by many in this realm, we talk about the current music climate and what we can expect from them in 2016.

DJ Complexion has been in the Serato lexicon for a minute, but there’s so many awesome people that make up FBR - tell us who you are:

Yaz: We’ve got an amazing team behind us pulling all the strings. We each take ownership of various jobs. For example, Complexion runs every aspect of the The Future Beats Show podcast from the track selections to the radio production and A&R of the label.

The online strategy and daily management of Future Beat Records is looked after by me and I also record a quick interview with the guest artists each week for TFBS.

Most of our awesome graphics for social media are done by Doug Richar and our new logo was designed by Pon of the Hood Wood collective from Paris. On top of that we’ve got a family of producers from ROM to Digital Mozart, Eljay, Skit, VRSYJNES, Bassbear, El Blanco Nino, HARIKIRI, ChoiceVaughan, Soundpalette as well as singers Naomi Bowler and J-Rican.

Yaz, you’ve interviewed some of the most exciting up and coming talent. As a tastemaker, what do you look for in an artist from this new wave?

Yaz: In my eyes, individuality is the number one characteristic that defines an artist bound for success - they have to express their own identity through their music and not seek to copy another producer whose sound is hot right now. The best way to spot is talent is to look out for musicians not just producers. That’s not to say anyone who cannot play an instrument is not a musician; far from it. In my opinion, the fundamental difference is that musicians understand how melodies, drum rhythms and song structures work within each other in harmony and show the true craftsmanship of an artist.

One of my favourite examples is R.O.M who builds almost all of his tracks around his live recorded guitar chords and then he adds production on top. We’re involved in such a young scene that it’s all too easy to judge success based on social media numbers and not on production ability. Stay true to yourself !

Before Complexion opened my eyes to the Future Beats scene, I interviewed hundreds of hip-hop and R&B icons from the likes of Brandy and Jhene Aiko to Wiz Khalifa and Kid Ink. That was dope but nowadays it’s amazing to be documenting history with the next generation of stars like Troyboi, Daktyl, Sam Gellaitry, Phazz & ELHAE. In a few years I hope I’m able to look back on their debut London shows with a smile and remember how crazy it was to play in a ratchet club in East London before moving onto festival stages.

Let’s get a little controversial right quick lol - the space vibe has always been a trademark of FBR and TFBS but we’ve noticed a few movements dipping their hands in your honey pot. As leaders of the new school, is this flattering for ya’ll?

Complexion: What's crazy is that I'm genuinely into space, it's something that's fascinated me since I was young. When I first heard 'Future' music it was something that I imagined listening to whilst I cruised through the galaxy in my Millennium Falcon. Regarding everyone else? I hope it’s for the same reason...

Over the last three years we’ve seen glimpses of the future beats sound in mainstream music - Ekali is a good example of this. Anyone we should keep an eye out for?

Yaz: It’s a blessing to see our friends making power moves on UK radio station BBC 1Xtra, we’ve passed a few tracks to some of their awesome DJs and we’re seeing artists like Mura Masa, Nao and R.O.M get weekly airplay.

Personally, I think the Soundcloud community don’t really look at the mainstream charts as an indication of good music; by following bedroom producers online you have the luxury of not feeling restricted to commercial outlets dictating ‘good music’. One record we never expected (but are hella proud of) is Jorja Smith’s ‘Blue Light’s, that’s Complexion cutting up a Dizzee Rascal sample at the end with the scratches.

What can we expect from FBR this ‘Summer Sixteen’ and beyond?

For our 2016 plans we’re going to take the label back to it’s roots and release music from artists who have developed a following via The Future Beats Show. That was the whole concept and brand vision we started with - to build a platform for talented artists who deserve the opportunity to unveil the recognition for first digital release on Spotify, iTunes, Beatport and other services. It’s crazy to thing we founded the label in May 2013 and are coming up towards celebrating two years!