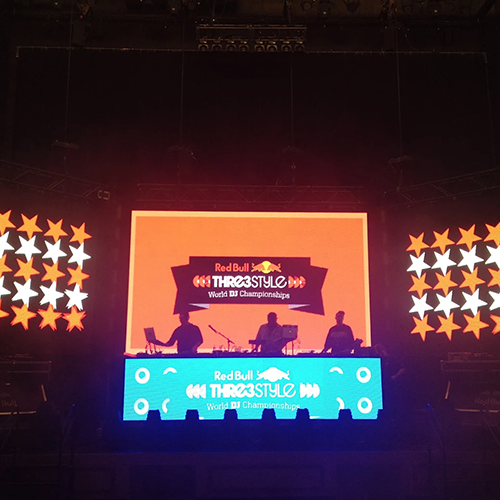 This year the Canadian 3 Style National Finals were hosted in Winnipeg, Manitoba at the Metropole theatre, a stunning venue for the seven finalists to work their magic.

The night kicked off with local legends, Co-Op and Hunnicut, who are some of the most entertaining and hospitable people I’ve ever met. They warmed the crowd up perfectly for Thugli who took the stage and BLAZED through their set of exclusive remixes and trap bangers, with an incredible LED wall displaying their custom visuals throughout. Their show is definitely one to see... Drastik (1 half of Thugli) is a previous National Thre3Style champion himself, and with Tom Wrecks they have great chemistry as a live duo.

Vancouver’s DJ Flipout introduced the seven finalists and the competition began… First up was Trapment from Sudbury, Ontario. Unexpected tracks from artists like Limp bizkit, good flips of the Fugees, strong stage presence and a nice juggle with Backstreet Boys “Everybody” and C&C Music Factory's “Every Body Dance Now”, which gave his set a well rounded and very strong start to the competition. To be honest, I don't like these songs, but Trapment was able to flip them in a way similar to DJ AM, that got your attention and made them interesting and exciting to hear in a different context. This strong effort ended equally as strong with him leaving the stage to Whitney Houstons “I will always love you”. Swoon king.

OKTK from Halifax, Nova Scotia came on the set looking very relaxed and confident, which showed throughout his performance. His theatrics and wordplay made for a really fun performance. He used Busta Rhymes' “Get Down” while he physically got down behind the tables only to jump back up exposing that under his hoodie he was wearing a Winnipeg Jets (hockey team) jersey! A sure fire way to win over the local crowd. Remember this is Canada, and hockey means a great deal to Canadians, especially in chilly Winnipeg! OKTK ended strong with a unique live re-drum remix of Key’s N Krates “Are We Faded” which certainly gave him points for not only technical but also crowd reaction.

DJ Acro also from Ontario, came out of the gate strong with nice song selections, but ran into some technical issues that really seemed to throw him of for the rest of his set.

Wackutt, from Golden, B.C, is well known in these parts as a touring DJ and part of the Shambhala festival. He seemed to have a great reaction with the local crowd and used his turntablist background with very strong scratching and juggling. His choice of Drum n Bass tunes and Rap classics fared well with the crowd but I don’t think resonated with the judges the same way.

Nick Bike from Vancouver had a clean well executed set with clever wordplay and nice pacing. It was a fantastic set for the regular touring DJ but I think fell just short on the technical aspect, as he was one of the only DJs there rocking without any additional control at all. Impressive nonetheless, it's amazing to think how much he was able to get done with just the Rane Sixty-Two and 2 turntables. Still works :)

Charly Hustle (Saskatoon) who placed 2nd in the regionals certainly had a trick or two up his sleeve. Charly is a bit of a Renaissance man, and started his set with classic oldies which gave the set a nice narrative as he moved into more modern tunes. They crowd was in the palm of his hand and his performance was really animated as well. Using more obscure hits like DRAM’s “Cha Cha” was really tasteful, winning points from the judges and keeping everyone really entertained. It was clear this set was one of the strongest and by the end of it the crowd had been convinced of this, leaving with great applause.

We wanted the funk, and C-Sik certainly brought that. Cool drops and interesting song selections were lost on the local crowd though and didn’t resonate, which was the only things holding back an otherwise flawless set.

Former world Champ Hedspin, Z-Trip and Skratch Bastid all performed seamless, fantastic sets while the judges made their deliberation. Of course they did.

The winners were announced as
Charly was authentically surprised by his victory and very gracious with it. The party kept going until the early hours of the morning back at the hotel (after the party it is the hotel lobby).
See you in Tokyo Charly!