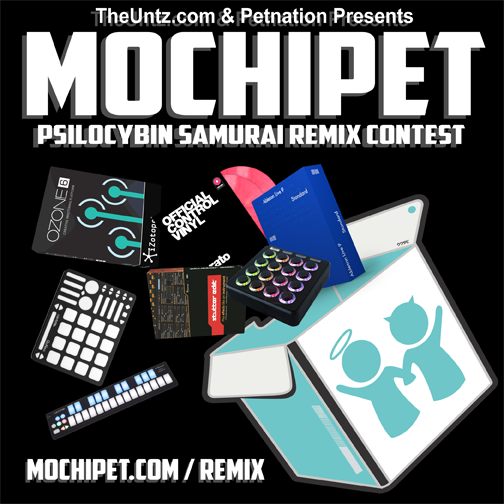 Calling all Producers and Beat Makers! Petnation Recordings has teamed up with TheUntz.com to present a remix contest for Mochipet's new album Psilocybin Samurai! Entrants can choose between remixing the title track "Psilocybin Samurai"or the Glitch-hop Trufflestep Banger "Cractal Frunk." Adding to the fun Mochipethas brought his friends edIT of the Glitch Mob, Z-Trip, Ill-Gates, and Mr. Lif to judge the contest!

Both a grand prize winner and a runner up will be chosen to appear on the release, and in addition will receive prizes such as a copy of Ableton Live Standard, Keith McMillen Instruments QuNeo & K-Board, Midi Fighter by DJ TechTools, iZotope Ozone 6 + Stutter Edit, and Serato Control Vinyl + DJ Licenses.

Submissions are due by April 14th, 2015 and must be submitted to the remix contest SoundCloud group. More info is below. So get to work, and good luck!